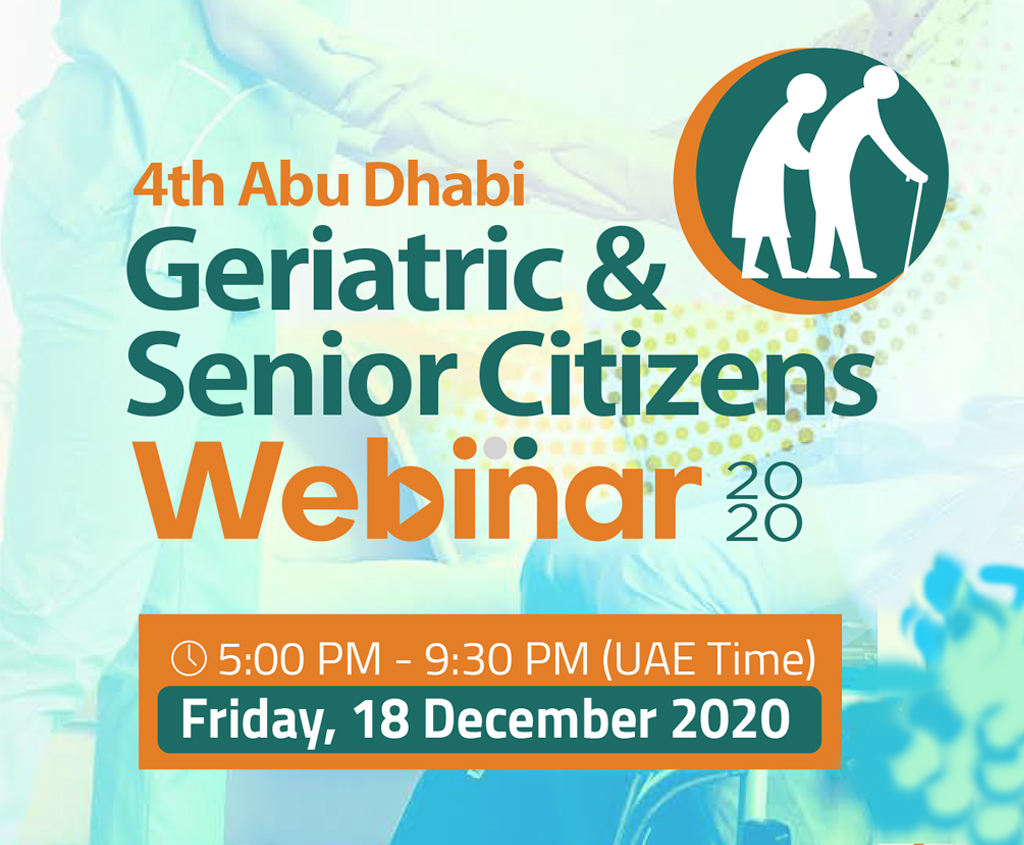 The invaluable session on Geriatric & Senior Citizens has scientifically explained how to protect senior citizens and how to care for their lives in the way they deserve. The rare and informative session enlightened the thought that together we can take care of the elderly and maintains their independence for as long as possible. 701 delegates from 28 countries have made the 4 hours and 30-minute long webinar a great success. A number of compliments were received in the chat box praising the topic selection, the beautiful presentation of the speakers, and the event organizing.

Dr. Ali Al Ameer has explained the Palliative Care for Patients with Dementia. His main focus was to educate the attendees on planning good palliative care for persons with advanced dementia based on ethical guidelines and integrating and assessing issues of nutrition difficulties and other problems to achieve maximum symptoms relief in the late palliative phase of dementia. Palliative care includes communication or early care planning, teamwork, caregiver support, and symptoms treatment. The session has taken through the type of dementia, injury based symptoms, and different functional levels of palliative care with each type of condition. As part of the explanation on behavioral and psychological symptoms of dementia, he said that communication difficulties should not be treated with drugs.  Communication difficulties often lead to misunderstandings of behavioral and psychological symptoms. The session also touched on the areas of the late phase of dementia, dementia medication, and Issues before closing life-prolonging treatment.

Dr. Abdulaziz Alodhayani has explained the topic of Elderly Patient at Office, with the case-based approach for family physicians. He shared the history of clinical cases in outpatient geriatric clinics. The first case referred to a 77-year-old woman with a history of lightheadedness and diagnosed with postprandial hypotension (PPH). The condition is relatively common in the elderly and in patients with diabetes or other autonomic dysfunctions. While explaining the treatment for PPH, he stressed that improving diabetic control will reduce the risk of developing autonomic neuropathy and orthostatic hypotension and reduce carbohydrate meals. Clinical case 2 referred to a 67-year-old man, who started experiencing tremor for the last 2 years that gradually became more obvious mainly in his left hand. According to Dr. Abdulaziz, the patient was having ESSENTIAL TREMOR. The first-line therapy of essential tremor is propranolol or primidone and both of them are equally effective too. Another case discussed the condition of a 72-year-old woman with Type 2 Diabetes Mellitus (T2DM ) who complains of unsteadiness and near falls over the last year. After diagnosis, he confirmed that the patient has neurological symptoms and borderline vitamin B12 levels which are suggestive of vitamin B12 deficiency. The borderline deficiency may present with neurologic symptoms like paraesthesias or numbness, muscle weakness, gait instability, or cognitive impairment. He emphasized the significance of vitamin B12 in the elderly, its metabolism, treatment, and deficiency management. The next clinical case referred to a 75-year-old woman with T2DM, who presents with painless visual loss in her right eye, diagnosed with amaurosis Fugax condition. The most common aetiology is retinal artery ischaemia due to atherosclerotic emboli from the carotid artery.

Dr. Salwa Alsuwaidi examined each and every aspect of depression among seniors. She opinioned that depression is a common and serious mental condition that requires treatment. Although it is common in the elderly, it is not a normal part of aging. According to the Centers for Disease Control and Prevention (CDC), depression affects about 1%-5% of the general elderly population. Major depression occurs in 7% of the general elderly population and it accounts for 1.6% of total disability among over 60-year-olds. Risk factors include biochemistry, genetics, personality, and environmental factors. The causes can be influenced by psychological, biological, and social factors and this will lead to reactive depressive syndromes and Endogenous depressive syndromes. Depressed older adults are less likely to endorse affective symptoms and more likely to display cognitive changes, somatic symptoms, and loss of interest than are younger adults. Depression in the elderly may be difficult to diagnose because of factors such as late-onset, comorbid medical illness, dementia, and bereavement. The clinical challenge of treating geriatric depression with cognitive impairment is determining the extent to which cognitive changes are caused by depression versus underlying brain pathology. As the (COVID-19) began to spread in early 2020, older adults experienced disproportionately greater adverse effects from the pandemic including more severe complications and higher mortality. Psychotherapy can be used as either a primary or an adjunctive method of treatment, depending on the elderly patient and the presenting problem. This can include Cognitive Behavioral Therapy (CBT), Reminiscence Therapy, Pet Therapy, Meditation, and family support. In the case of Pharmacotherapy, selective serotonin reuptake inhibitors (SSRIs) and tricyclic antidepressants (TCAs) are equally effective in the elderly, where SSRIs tend to be better tolerated and associated with fewer adverse effects. She concluded that depression is both underdiagnosed and undertreated by health care providers. However, depression in late life is treatable, even among older adults with dementia.

Dr. Yahya Takreete has sought delegates’ attention to the diagnostic and therapeutic challenges of late-onset Psychosis. According to his findings, many common psychiatric disorders prevalent in the elderly are associated with psychotic symptoms and behavioral disturbances. Causes and clinical manifestations of symptoms can vary according to the underlying condition. He shared case reports of an 84-year-old male diagnosed with Dementia of the Alzheimer’s type, a 90-year-old female diagnosed with major depressive disorder (MDD) with psychotic features, and a 68-year-old lady diagnosed with acute confusional state (Toxic Psychosis). He said that the prevalence of psychosis in the elderly is difficult to estimate due to the lack of diagnostic consistency. Late-onset psychosis could be part of schizophrenia, delusional disorder, mood disorder, substance-induced psychotic disorder, secondary to a medical condition, or dementia. Recent studies show that Psychosis in Parkinson’s disease is associated with high morbidity, mortality and considerable caregiver stress and burnout. He also explained neuropsychiatric symptoms in Dementia, psychotic symptoms in Alzheimer’s dementia, and treatment options such as family therapy, psycho-social therapy, cognitive-behavioral therapy, and antipsychotic medication. Getting old will affect the efficacy and tolerability of all medications and lead to antipsychotics for an elderly patient.

Webinar Chairman Dr. Abdulla Saeed AAl Ali has conducted the first Q&A session after these sessions due to the increased number of questions. Questions from the basics to the advanced level were answered and discussed, which was really informative for all the attendees. The chairman announced a 15 minutes break and the webinar resumed at 07:35 PM, Dubai time.

Dr. Abdulrazak Abyad’s session was focused on the topic named “Updates in Hypertension Management in the Elderly: What are the Appropriate Targets? His extensive experience in this field made the session worthwhile. There is a dramatic increase in the prevalence of hypertension with aging; by age 70 years, the majority of people have hypertension. It is a major health problem that affects 1 billion people worldwide. In older adults, hypertension is characterized by an elevated systolic blood pressure (BP) with normal or low diastolic BP, due to age-associated stiffening of the large arteries. It is a potent risk factor for cardiovascular (CV) disease in the elderly. He explained the blood pressure management benefits and mentioned a possible unintended consequence of blood pressure criteria used by trials attempting to answer different primary questions is that no trial evidence exists to inform treatment decisions in routine practice for many older patients. Caution should be exercised when applying results from existing trials to patients to patients with frailty or multimorbidity.

Dr. Waleed Abdullah Mohammed Al Malik has delivered a clear and factual session on Constipation in elderly. He explained its common causes, signs and symptoms, and complications. As far as the Epidemiology, constipation is found in 15% of the population in North America. To avoid or manage chronic constipation, he advised to reduce or stop constipating medications if possible, consider metabolic causes of constipation, and consider a structural evaluation to exclude obstructive lesions along with other steps. He educated the attendees with treatment, diet, and medication for the condition. According to him, constipation can indicate an underlying problem that needs to rule out. Opioids are not the only offending drug and the elderly can develop delirium with just constipation. He said that never prescribe Pulmonary Rehabilitation intervention without oral.

Dr. Fatima Al Hajeri shared Common Gynecological Problems in Elderly Female. During the session, she has shared key clinical issues introduced by aging, aspects of gynecologic care unique to older women, and perioperative recommendations to reduce morbidity and enhance function. She said that prevalence rates vary widely by definition and population. Frailty is a state of progressive decline and dysregulation of molecular, cellular, and physiologic systems. Even when disease prevalence is higher, the utility of cancer screening decreases in advanced age, primarily due to competing causes of mortality and lead time from detection to symptoms. There was an exclusive mention of out-patient geriatrics care and most common complaints that include a wide variety of problems. Proactive guidance toward medical, social, and legal resources helps a frail woman with diminishing capacity to maintain function and independence. In addition to knowing the patient’s daily living function and social support, key geriatric practice modifications that improve outcomes are giving extra attention to communication, watching for cognitive decline, maximizing mobility and function, minimizing medication number and dose, adjusting perioperative care for aging physiology, and appreciating the uncertainty of the time after hospital discharge.

Webinar Chairman Dr. Abdulla Saeed AAl Ali has expressed his sincere gratitude to the speakers and attendees and congratulated the effort behind the success of the perfectly executed webinar.