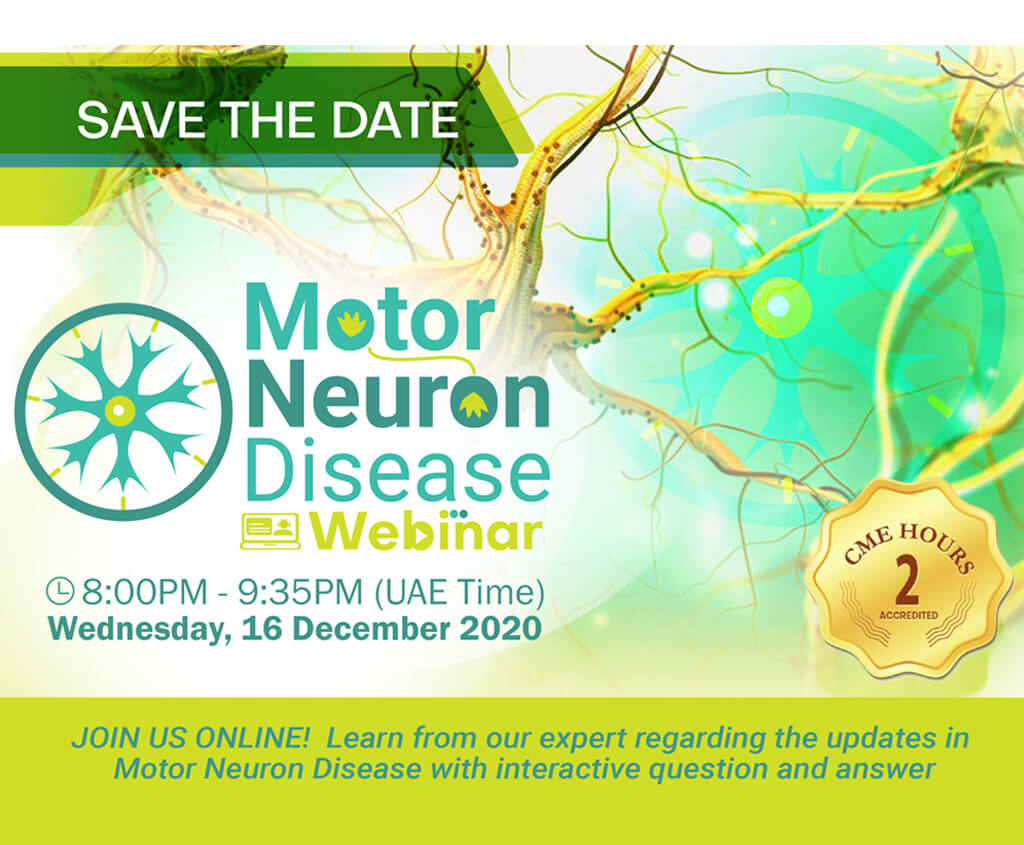 The successful webinar on Motor Neuron Disease was fruitful with the presence of experts and 690 attendees from 20 countries.  The interactive webinar, which discussed the updates in Motor Neuron Disease, was conducted in a very organized and effective manner and the attendees found it very informative and useful. A number of compliments were received in the chat box praising the topic selection, the beautiful presentation of the speakers, and the event organizing.

Dr. Mahmoud Ahmad Al Hajji has delivered the session which is focused on Update on ALS Electrodiagnostic Criteria. He started with a clinical case of a 52-year-old male patient who presented with an eight-month history of swallowing difficulty, slurring of speech, and weight loss. According to Dr. Hajji, diagnosis is made upon meeting clinical criteria with supportive EMG findings and excluding other mimickers. Nerve conduction study and needle electromyography remain the most important diagnostic testing for ALS. A fundamental quality of ALS is the presence of UMN and LMN findings that spread without remission to ultimately involve multiple body segments (Cranio-bulbar, cervical, thoracic, and lumbosacral), often in a predictable pattern. He also explained the factors contributing to ALS diagnosis Delay and its consequences. It is possible for a patient to have both ALS and an additional neurological disease such as peripheral neuropathy or carpal tunnel syndrome. Diagnosis and treating these comorbidities may result in improved quality of life.

Dr. Edward J. Cupler has centered his session on the recent updates in the treatment of amyotrophic lateral sclerosis. He started the session pointing out the significance of supporting the people live with the disease. Pathology, genetics, and symptom management in ALS is well explained during the session. One of the medications Riluzole has an inhibitory effect on glutamate release and has the ability to interfere with intracellular events that follow transmitter binding at excitatory amino acid receptors. Riluzole 100 mg daily is reasonably safe and probably prolongs median survival by about 2 to 3 months in patients with ALS. He mentioned another medication Edaravone, which has been in the late 1980s as a treatment for stroke in Japan, approved for stroke in Japan in 2001 and ALS in 2015. Dr. Cupler has detailed the safety and efficacy of Edaravone in well-defined patients and delaying Functional Decline in ALS.

Webinar Chairman Dr. Abubaker Al Madani has conducted the Q&A session at the end and expressed his appreciation and sincere gratitude to the members for facilitating the webinar with so many participants.